Thank you, dear anonymous readers, who recently followed the links from my blog to buy whatever it is you bought on Amazon. Your support of your favorite blogger is highly appreciated. With the profits I get from Skimlinks that make this kind of monetization of a WordPress blog possible, I will be able to buy more books and expand my wisdom even further. 🙂

Please feel free to do the same in the future. 🙂 If you are planning to buy something from, say, Zappos or Macy’s or Canon, anyways, why not do it by clicking through to the site in question from a blog you like? It changes nothing for you but ends up benefiting a blogger.

This post is sticky because I want people who did this good thing to see my gratitude for sure. Scroll down a little for new posts.

I don’t spend much time in American churches, as you might have guessed, but today I visited one to attend a wedding. And was shocked to discover little cards that you could fill in to get the church staff to pray instead of you.

On the other side of the card a space is provided for you to describe the request you want this prayer to contain.

I understand that people lead busy lives but there should still be things that we don’t delegate to others. Thinking, breathing, eating, loving, drinking, sleeping, learning, even going to the dentist are activities that nobody can do for us. Surely, prayer is one of them. How could it have occurred to anybody that you can get others to pray instead of you? What next? Pre-recorded prayers that are made at regular intervals for a low price of $19.99?

And when thou prayest, thou shalt not be as the hypocrites [are]: for they love to pray standing in the synagogues and in the corners of the streets, that they may be seen of men. Verily I say unto you, They have their reward.

But when ye pray, use not vain repetitions, as the heathen [do]: for they think that they shall be heard for their much speaking.

I wonder what the guy who came up with the the above-mentioned suggestions would have had to say about this practice of getting others to pray instead you.

David Bellamy has sent me a link to the story of a man in Ukraine who has spent 35 days in a cage with lions. Here is a photo for you, and you can see an entire slideshow over here: 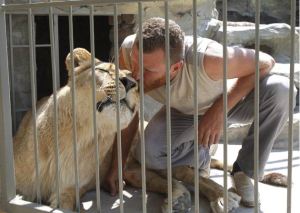 Zoo owner and artist Aleksandr Pylyshenko looks out from between bars of a cage, next to female African lion Katya, at a private zoo situated in his yard in the city of Vasilyevka, southeastern Ukraine August 3, 2011. Pylyshenko decided to spend five weeks in a cage with a pair of African lions, Katya and Samson, to get money for improving the lions’ living conditions, according to local media. He is broadcasting it on internet to attract the public’s attention to plight of wild animals in private Ukrainian zoos, which do not get enough fundings.

There is, of course, a certain cultural reality behind this, and I thought my readers might find some background I can provide useful for the understanding of this piece of news.

In the Soviet Union, zoological gardens were extremely popular. We had a really big one in my city and used to visit it often. As a child, I always felt a lot of discomfort at the sight of polar bears, giraffes or elephants stuck in small cages in what was very obviously not a comfortable environment for them. I could never understand how visiting a zoo could be considered fun. I haven’t been to any zoos in North America, so I don’t know what the conditions there are like. Even though I’m not a huge animal-lover (to put it very mildly), I always suffer at the idea that a poor creature is kept away from its natural habitat because people find it enjoyable to gawk at it for some puzzling reason.

After the collapse of the Soviet Union, funding for state-owned zoos became very scarce. Many animals simply starved or froze to death during our harsh winters. At the same time, many private citizens came into big money. Post-Soviet nouveau riches competed with each other in how much money each could spend on something completely outrageous. Among them, it soon became prestigious to have an iguana, an alligator, a monkey, a python, or a tiger of their own. There came into existence a huge black market dealing in exotic animals.

Eventually, this situation led to some people opening “private zoos”, like the one owned by the guy in the photo. Anybody can build a cage in the backyard of their house in a village, like he did, bring in some animals, and keep them there. It might seem strange to you that a guy could keep lions, a bear and two lynxes in his backyard just because he wants to, but in Ukraine it’s not a big deal. As the owner says on his website, he bought a lioness for just $3500 + shipping costs.

The main argument you hear from people who oppose Gay Pride events is, “Well, then why don’t we have a hetero pride parade, huh? If other people have a right to be proud of the way they have sex, so should we, don’t you think?” A variation on this is, “What is there to be so proud about the way you fuck? I like doing it sitting in an armchair. Should I throw a parade to celebrate that?” And now, a city council in a fiercely homophobic Brazil has established a Heterosexual Pride Day.

The problem with this argument is that* it involves a (willful?) misunderstanding of how the term “pride” is being used in the context of gay rights movement. It isn’t about being proud in the sense of “I’m so better than you are, nyah, nyah, nyah!” It’s being proud in the sense of not being ashamed. Of accepting who you are and not hiding it from the world. It’s about pride as an absence of shame and self-hatred.

Of course, if you have spent years being ashamed of your heterosexuality (or preferring sex in an arm-chair) and have hated yourself for being the way you are and have been discriminated against for it, then go ahead, have a Hetero Pride Day or an armchair-fucking day.

*I’m not gay and I explain this the way I understand it. My queer readers should feel free to state their own perspectives.

Reader Bola asks, “What do you think about polyamory?”

I’m probably the most monogamous person anybody has ever met. I have had a very intense personal life but I always had a single partner at any given time (or no partner at all.) For me, being in a relationship is a concession I make. I’m a person who is very happy being single. I practice singlehood like a form of art. So for me to agree to be in a relationship, I have to experience such a profound passion for a person (which might last 2 hours or 20 years) that nobody else exists in the world. When I’m in love, I literally don’t see a huge group of naked, athletic men running around me.

But other people are just that, other people. They have other needs and other ways of achieving personal happiness. I could never be in a polyamorous relationship, just like I could never be in a lesbian relationship. I do, however, firmly believe in everybody’s right to find sexual happiness and fulfillment the way they want. For me, polyamory is neither better nor worse than monogamy. It’s a way of being that other people prefer and that makes them happy. And I celebrate that.

P.S. This was the easiest one, so I answered it first. 🙂 Thank you, Bola, for making my live easier. 🙂