Among all the weird gifts out there, this gift I found at a store in Canada truly deserves some sort of a prize for weirdness: 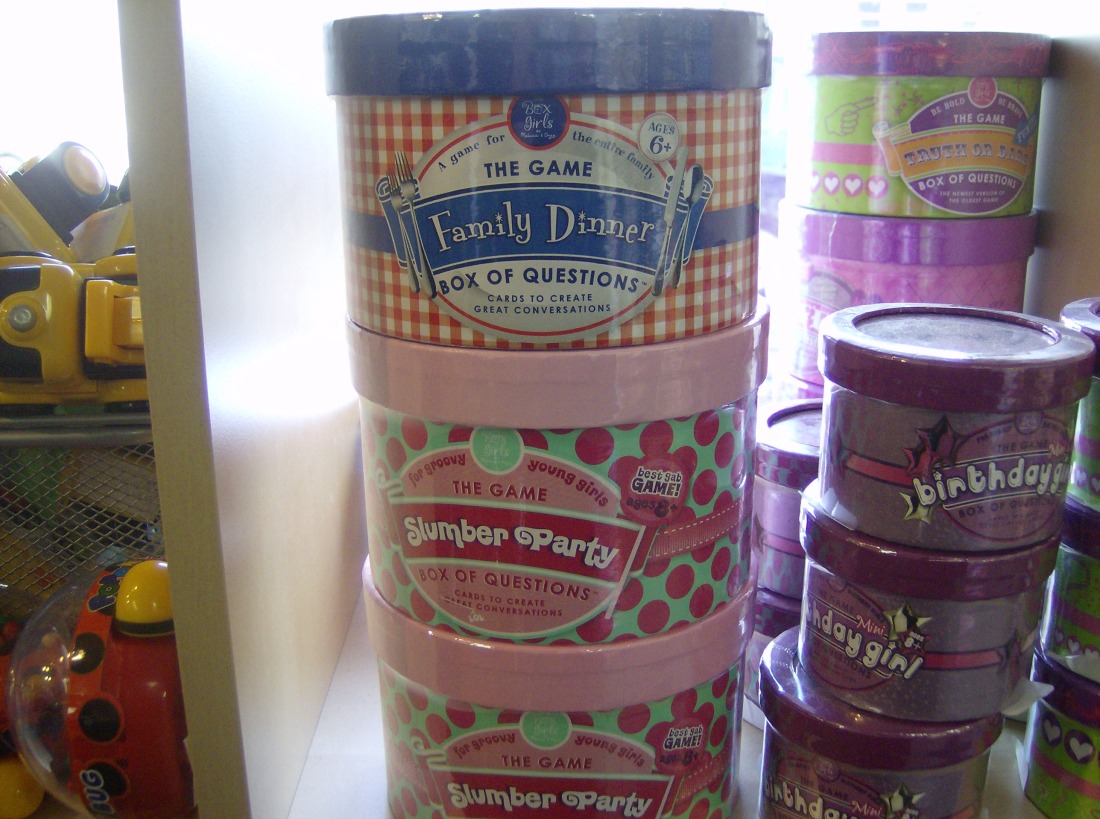 Can you imagine a family that needs a box of questions to suggest topics for dinner conversation? I mean, if you have nothing to talk about, what makes you think you are a family?

I have to say that I’m really puzzled by all these discussions as to whether Hugo Schwyzer should be forgiven for whatever it is he did in the past and whether his repentance is genuine. The only people who have the right to forgive or not forgive Hugo are the ones whom he hurt (I don’t know if he did or not, that’s his own private business.) If he (or any other blogger) shares a personal story that bothers me, I can say I feel repugnance, I can condemn the blogger’s actions, I can write passionate posts in response. But it isn’t my place to grant or withhold forgiveness from a total stranger.

It really bothers me that people identify so strongly with bloggers as to start seeing them in highly personal terms. We can all realize that this is unhealthy, right? I understand the temptation to spend a lot of time online. I succumb to this temptation too often myself. But the moment when you seriously start to consider whether you can forgive a complete stranger who has no personal relationship with you, I say you need to step away from the screen and go have a life.

Whenever I see those really scary news segments where some celebrity du jour apologizes to anonymous crowds for cheating on his or her spouse, I realize that this is a society where way too many people have no lives of their own and live vicariously through others.

The definition of “repentance” is:

Repentance (Greek: metanoia) is a change of thought to correct a wrong and gain forgiveness from a person who is wronged. In religious contexts it usually refers to confession to God, ceasing sin against God, and resolving to live according to religious law.

Got it? So unless you are either the person who has been wronged or God, you have no business expecting anybody’s repentance, believing or disbelieving it.

I hope to close the topic of Hugo Schwyzer on this blog for a long time to come. Before I do so, however, I want to say the following. I disagree with Hugo Schwyzer on a variety of issues. I’ve had some very heated discussions with him. I condemned his position on a host of subjects and have written about his views in very harsh terms.

However, the treatment he has been subjected to recently on Feministe is nothing short of disgraceful. What I find especially ridiculous is the strong religious vocabulary of “redemption,” “repentance,” “sin,” “reforming,” “redeem,” etc. used by many of the participants. (Just do the context search of the thread and you’ll see for yourself.) It feels like the entire Michele Bachmann camp of supporters has alighted on what is supposed to be a feminist website with no specific religious affiliation.

It’s funny how even the most progressive folks tend to slip into the preachy tones of the most annoying among Bible-thumpers whenever it suits them to do so.