Being good at cooking is a great skill to have. Just look at the great Memorial Day dinner I created in under 15 minutes.

Grilled salmon steaks with herb dressing and boiled baby potatoes with cilantro. The dressing for the salmon steaks is very easy to make: lemon grass, two cloves of garlic, some fresh basil leaves, some fresh ginger, and a pinch of salt.

Healthy, fast, easy to prepare. And it looks beautiful, too. 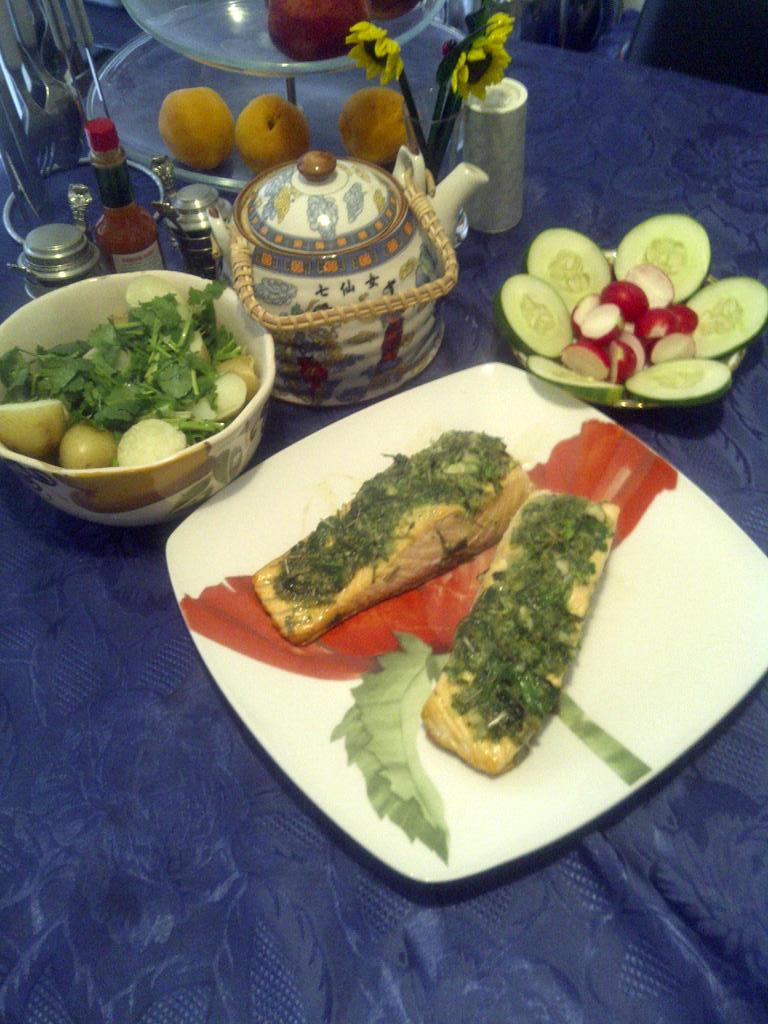 A fascinating post by a woman who converted to Islam but then left the faith and is now blogging about her experiences.

The restructuring of Spain’s banking sector is slaughtering small and medium-sized businesses. Should we expect to see the same here?

Three Potato Salad with Arugula: a perfectly beautiful and healthy recipe for this time of the year. If you never tried purple potatoes, I highly recommend. They bring joy to many different dishes.

How religious fanatics brainwash teenagers about sex in hopes of raising a generation of sexually unhealthy, miserable people.

A great post on the food policy. Finally, somebody is trying to attract everybody’s attention to how unhealthy the food we eat is. Instead of quasi-progressive blabber on fat acceptance, let’s have a movement of no acceptance to the junk we are being sold under the guise of food.

Where the supermarket sushi come from.

Child abuse in India. I believe the numbers would be very similar in my country which is why I agree with the author of the OP that this is not all that culture-specific an issue.

“Even President Obama, when talking about education, seems to put it purely in terms of job training. Can’t our higher education reflect higher values?” Good point that is not made nearly often enough.

Please read this shocking post about the abusive and exploitative practices of a place called Antioch University. I think it should be renamed into “Anti-Learning University.” Why do people hand their money over to these crooks when they can attend a much cheaper state university like mine where they will get a real education?

Be careful with whom you pity. They might turn out to be very cuckoo.

I’m fascinated by these reports on life in North Korea because they remind me of how the horribly destructive system we started in my part of the world is still poisoning the lives of many people in completely different cultures.

Why ultra-Othodox Jews are anti-Internet. The article is a lot more interesting than the title, I promise.

“Essentialist feminism and biological determinism both are detrimental to intellectual development.   You cannot be open about the future if you are working within deterministic systems or within categories of pre-defined identity.”

A great post on how we are likely to copy the pattern of our parents’ personal life because that’s the only one we know. Remember, people, just telling yourself, “I never want to become like my mother!” is not going to work.

Do you have a specific definition of what you call patriarchy?

Since I use the term “patriarchy on a regular basis, I think I should explain what I mean by it. So here is my definition:

The patriarchy is a system of social relations where:

a) people accept and enforce strict gender roles in order to perpetuate the system where men castrate themselves emotionally and psychologically in order to be able to purchase women and women castrate themselves sexually and professionally in order to be able to sell themselves. Mind you, I’m not talking about buying and selling of sex, which is a completely different issue. I’m talking about men and women entering into a contract where each castrated individual pledges to offer his or her castrated partner what that partner has excised from him or herself.

b) these castrated men and women are welded to each other. As individuals, they cannot survive or lead a full existence because they have lopped off parts of themselves. Now, they need the other to exist.

c) the castrated partners get a reward for leading these castrated existences and being bound to each other not by love but by their self-invalidization. That reward is their children. In patriarchal families, children belong to their parents for as long as those parents remain alive. The children are consumed and cannibalized by the patriarchal parents in every possible way. Sometimes, the adult children are quite elderly but still don’t have a right to a life of their own because they are still in bondage to their parents.

I think that you can now easily deduce for yourselves what kind of people would welcome and defend the patriarchal form of existence. (A hint: “men” is the wrong answer. “Some men and some women” is more like it.)

I consider low self-esteem to be the most wide-spread and insidious psychological problem. Alcoholism, drug addiction, anorexia, miserable personal lives, failed careers are among the consequences of this issue. Here is the classification of different forms of self-esteem that I have come up with:

I. The people who have been fortunate enough to emerge from their childhood and adolescence with a good and healthy self-esteem, a.k.a lucky bastards whom I’d gladly admire if I didn’t envy them so badly.

II. People with low self-esteem are less monolithic as a group than the folks with high self-esteem. They can be broken down into the following categories, based on how they handle their problem:

1. Those who realize early on that they have this issue and start working consciously and patiently on improving their self-esteem. These are people who are self-aware enough to acknowledge that this is a problem that has hurt them badly and who refuse to inflict the same suffering on others.

2. Those who lack self-awareness and spend their entire life consuming other human beings in a way that allows them to pretend that they don’t have low self-esteem. They do this in a variety of ways:

a) Whining. There are those who milk others for self-affirmation, compliments and reassurance all day and every day. “I know I look fat in this,” they say in a tragic voice. You try to reassure them but they resist. “No, don’t try to make me feel better,” they wail. “I know I’m grossly fat.” When you get tired of reassuring them, they broke down in tears, “You see, I knew you thought I was fat!” These people pose as victims when, in reality, they are the ones who victimize others by dumping their issues on them.

b) Denigration. These are people who make themselves feel better by making others feel worse. They keep making comments that make others feel bad about themselves. This is a form of bullying that is aimed at providing them with a very temporary relief from the constantly nagging pain of low self-esteem. The relief is always very fleeting which makes such people seek fresh victims on a regular basis.

The problem is that those of us who have low self-esteem are especially likely to fall into the clutches of people who address their own self-esteem issues in these unhealthy ways. This is why it’s so crucial for us to avoid them and remove them from our lives as soon as we catch on to their game.

3. Those who are too good and kind to feed other people to the perennially famished beast of their low self-esteem, so they engage in slow self-destruction in order to feed it. They self-sabotage their careers, personal lives, friendships, health. This is a life-long project of self-immolation. Such people never cause any harm to others but, boy, do they do a number on themselves! Since they are honestly persuaded that they don’t deserve anything good anyways, they end up with partners who abuse or undermine them, in lousy, unfulfilling jobs, and with friends who don’t appreciate them.

The saddest thing is that these perfectly good people believe with all their hearts that they actually deserve all that unhappiness and mistreatment.

“How did you react when your girlfriend told you all these things about how you did not deserve her because you were a piece of garbage?” I asked one such an acquaintance.

“I felt very grateful that she agreed not to dump me,” he said earnestly.