If you ever wondered why Gender Studies departments have turned into a huge embarrassment across North America, you can find your answer in this comment left on my blog today.

I’ve seen people leave quite a few stupid comments on the blog but this one is truly special. I even did something that I very rarely do and checked the IP address to see where this brilliant commenter came from. I won’t tell you because that’s too embarrassing.

Read it and weep, folks. 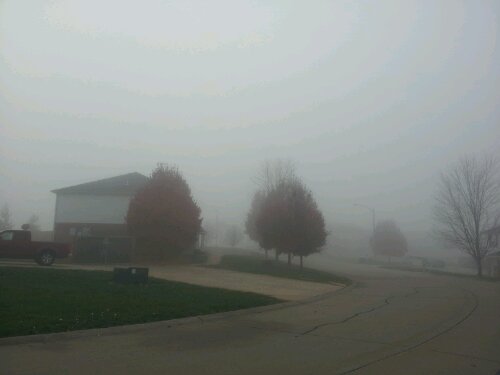 We have this beautiful thick fog today, and that makes me feel like we are finally going in the right direction. Anything is better than the endless sun we’ve had since March. I’m a night creature. The sun annoys me more than I can tell you. I mean, on the beach it has its uses but in regular life it is a pest.

It is terrifying that such horrible, guilt-tripping, manipulative parents even exist: 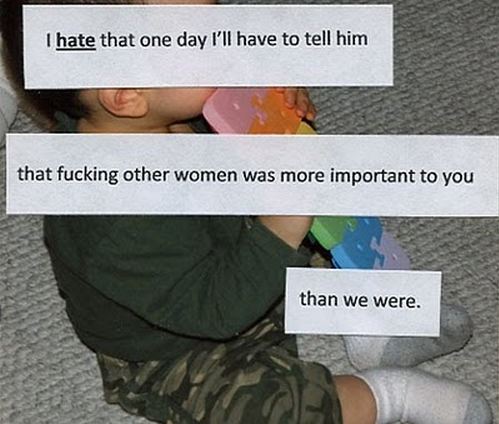 Note how the vicious animal includes the poor kid in the “we.” Instead of saying, “I’m a worthless lover and my partner tired of me but that should have no influence on your relationship with your father”, she pushes the guilt onto the completely innocent child. Now the kid will have to carry the burden of the Mommy’s sexual failures. This will certainly do wonders for the kid’s own personal life when he grows up.

I found the postcard here but I don’t in the least identify with the OP’s compassion for this disgusting creature. Beating up on small children in revenge for the sins of others is a horrible thing to do. It’s easy because the children can’t defend themselves but it is inexcusable.

It is curious that the kid’s face is plastered over with the text of the mother’s hysteria. For this kind of mother, a child is not a person. He is not a human being who has a face and a life of his own. He is, rather, a faceless object that can be manipulated and kicked around like a senseless toy. The child is nothing but a tool used to manipulate somebody else, a baseball bat to bludgeon his father. His feelings are neither referenced nor consulted.

I look at this small child whose face is hardly visible and whom I never met in my life and I know that I would never be able to make such a cruel comment about the  boy’s father to his face. The father might be all kinds of jerk (or not, who knows?) but I wouldn’t be able to bad-mouth him to the kid. Neither would I tell the boy all I think about his mother because I can’t hurt a human being in this way. What is so shocking to me is that there are parents – I have actually met them – who don’t bat an eye-lash before heaping abuse on their own children’s other parent. Do they have no idea how hurtful and damaging such comments are? The idiot Mommy in this post-card will have a crowd of men in her life but the boy will never ever EVER have another father.

P.S. In case the tone of the post left something unclear, anybody who tries to defend this kind of parents will be eviscerated. I’m sure there are many places where you can celebrate this kind of attitude but this blog is not one of them.