The most meaningful and amazing gift I got this holiday season was this book of recipes that used to belong to my grandmother Clarissa (the one who gave her name to this blog):

It was very hard to be a good cook in the Soviet Union because finding ingredients was a heroic feat. And even if you were lucky to find anything, you always had to stick to the same few items. People went out of their way to create inventive recipes and these recipes were treasured and passed from one person to another.

Grandmother Clarissa was a phenomenal cook and she collected all these recipes in a notebook that later passed to my mother. And now my mother gave it to me. Grandmother’s main area of cooking expertise was baking. She baked a new cake every week-end and they were invariably beautiful.

I also love to cook but one thing I never do is bake. I don’t like baked goods, and I believe that the best dessert one can have is a piece of sausage. N., on the other hand, loves desserts and is especially partial to cakes. So I told him that this year I will make a resolution to make every single recipe from Grandmother Clarissa’s recipe book. N. was so happy that he had tears in his eyes although I warned him that I can’t promise these desserts will start coming out right soon.

So here is the very first cake from Grandmother Clarissa’s book that I just baked. It’s called “A Black Man’s Kiss.” Don’t blame me, blame the Soviet people for the strange names of these desserts. 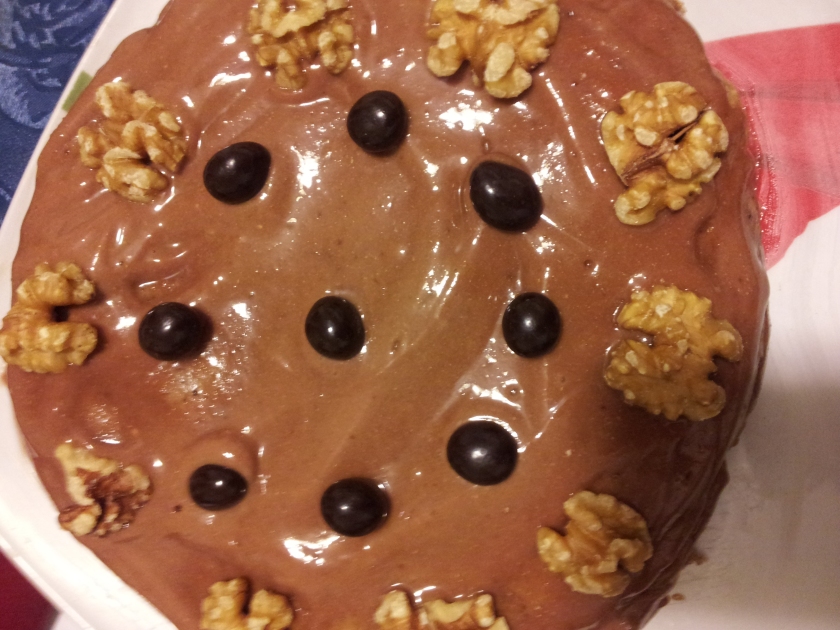 All of the elements tasted well separately. Now the cake will stand for 12 hours, and I will tell you how it tastes.

The recipe is under the fold.

END_OF_DOCUMENT_TOKEN_TO_BE_REPLACED

A beautiful defense of idealism: “Idealism is the only mindset which produces change. Without the determination to achieve a higher goal, and the courage to affirm that goal in the face of what exists, no one has ever achieved anything of value. The wet noodle mindset of “good enough” has never produced any value for anyone except exploiters and rulers. The willful acceptance and tolerance of evil generates more evil, and has never generated anything but more evil.” People keep accusing me of being an idealist as if it were something bad. This is a great response to them.

The modern way of placing a woman’s honor in her vagina: “Here in the US we have undoubtedly made progress in divorcing a woman’s virtue from her vagina. That’s why it is very disturbing to find a group of women who continue to insist that women’s honor resides in her vagina, specifically what comes through it. Natural childbirth advocates have located women’s fulfillment and authenticity in her ability to push a baby out through her vagina.”

A great post charting out a blogger’s feminist timeline that I want to write, too.

Is academic freedom slowly slipping away from us?

For my fellow parsnip lovers here is a great recipe of lentil, sausage and parsnip soup.

A boy separated from his sister because of international adoption goes to enormous lengths to be reunited with her. Poland must have gone nuts if it allows to separate siblings through adoption.

A horrible tragedy: “Aaron Swartz, who was a leading and controversial figure in the hacking movement and the push to make journal articles free, committed suicide Friday at the age of 26.”

Good thing we didn’t elect these woman-haters: “Rep. Paul Ryan is once again co-sponsoring the Sanctity of Human Life Act, which would recognize fertilized eggs as people. The personhood movement is extremely unpopular and has yet to garner a single victory in any of the states where it has appeared on a ballot, but that didn’t stop House Republicans, including Ryan, from supporting it, and now they’re going to try again.”

“One of the great political shifts in the past decade has been the move of scientists toward the Democratic Party, a casualty of the Republican Party’s war on reality. It’s not about politics for scientists, it’s about the fact that only one party accepts scientific findings on everything from global warming to evolutionary theory to what does and doesn’t prevent pregnancy. Only 6 percent of scientists identify as Republican, whereas 55 percent identify as Democratic. In October of 2012, 68 Nobel-winning scientists co-signed a strong endorsement of Obama, saying the President “has delivered on his promise to renew our faith in science-based decision making.” Yes, this is true. I still remember the time when every scientist I met voted Republican. And then George W. got elected.

A photo of en extremely polite baby. Some kids have beautiful manners even before they are fully born, it seems!

“Chris Spence, director of education for Toronto’s public school board, has admitted to and apologized for plagiarizing several passages in an article he wrote for the Star about the importance of extracurricular activities.” You have really got to be a massive loser.

Yet another GOP Representative is making insulting remarks about rape. I guess losing the presidential election was not enough to make them legitimately just shut that whole blabbing thing down.

I don’t have an anti-videotaping policy on my syllabi but now I’m wondering if I should. What do you think?

“Academics of my acquaintance often mirror this historical tendency by thinking of themselves as just getting by in the system, when in fact they’re doing much better than a great many of their colleagues elsewhere.”