Did you, folks, know that the Left in the US is extremely opposed to hate crime legislation? Because it leads to an increase in prison population.

I’m so not getting these people.

P.S. Sorry for the overabundance of posts. I miss my husband who is usually the recipient of this stream of commentary. Jeez, that poor guy. Now I feel bad for him.

Our grocery finally had some fresh sardines, and I decided to grill some.

First, I put some sweet potatoes, cherry tomatoes and spring greens in a baking dish and added some fresh rosemary and oregano. 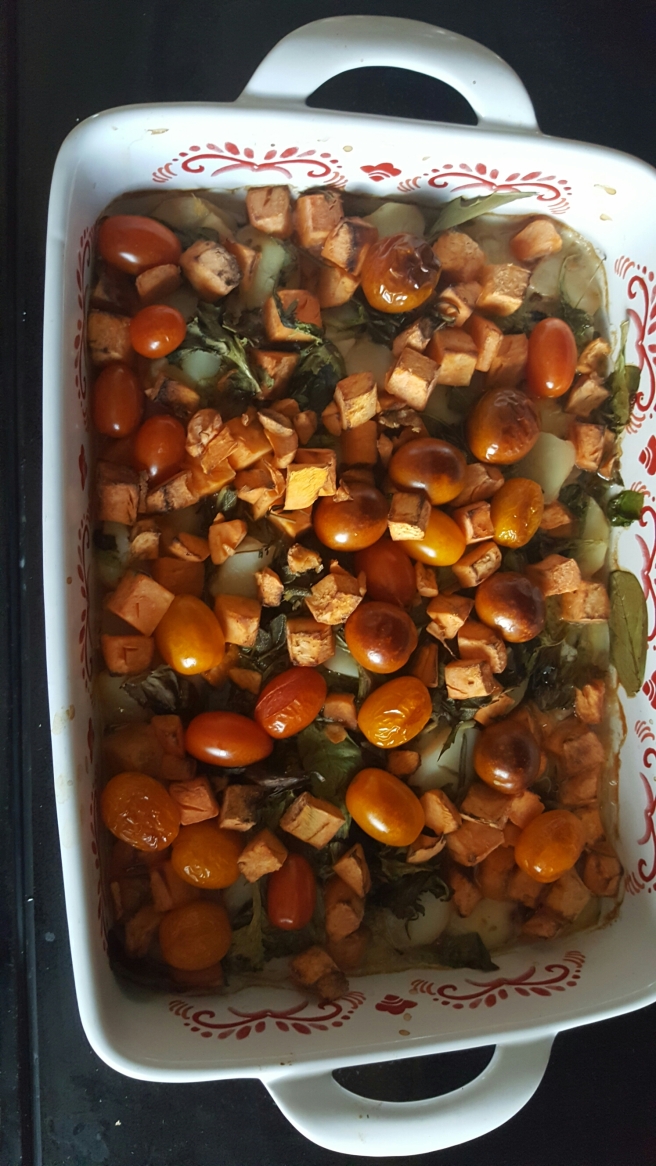 Then I poured a bottle of beer into the dish and left it in the oven until the sweet potatoes became soft.

I took the dish out and placed the scaled, gutted sardines on the vegetables and spread some of the spicy green sauce from the Indian restaurant on them. 20 minutes later, the dish was done:

I’m reading a collection of articles published by a colleague from my own department and feeling like a total idiot for not reading it before submitting the final version of my own book. It would have been super helpful.

There is never, never enough reading one can do.

Dear colleague, if you are reading this: the book rocks. Yay for the quinquis.

I read on a Russian website  (yes, I know, but still) that Trump is planning to deport green card holders who have been on some form of welfare for a significant period of time. Is it true?

Wouldn’t be that bad of an idea, either.

One of the little girls in the music class is called Jovi. I keep hoping she doesn’t have two older siblings called Jon and Bon.

There is also a girl called Harlo.

“What’s happening?” asked my dentist. “You never used to grind your teeth but now it looks like you’ve done nothing but grind them for the past year.”

I was kind of embarrassed to explain that yes, she was completely right, I’ve been grinding hard for exactly a year. Klara is so cute and adorable that I have to grind my teeth all day in order to avoid smothering her with kisses. She’s already the most kissed baby in the history of humanity but sometimes she needs me to leave her alone. So I grind.

I wish people didn’t only take boys to sports-related activities. The world has known men who ended up being musicians, writers, scholars, and chefs. It’s not like all men are athletes and women are everything else.

I also detest the currently fashionable idea that the Democratic town hall protests are “just like” what the Tea Party did back in 2009. I don’t care if this idea is expressed by somebody who’s supportive of the current protests  (see today’s NYTIMES), it’s still dumb.

There is a universe of difference between “Don’t take away the coverage for preexisting conditions” and “Take the government out of my Medicaid” or between “Representatives, do your job!” and “Government is evil.”

I think it’s fantastic to see reports of “Dems in disarray at their yearly meeting.” Sorry for using the obnoxious marketing terminology but if ever a party needed an instance of creative disruption, it’s this one.

A party that’s had nothing but a string of defeats for years has little to lose and everything to gain from some good, rejuvenating chaos. I haven’t felt this hopeful about Democrats in a while.