It’s so brutally hot where I am that I’m living the life of an invalid. I stay in bed with dimmed lights. It’s very exhausting.

So here’s a completely non-polemic question because I have no energy for a debate.

Are the rioting, the looting, the breaking of statues, the explosion in the cancel culture, the ideologically motivated firings, the social media blackouts of dissidents impacting how you are going to vote in November?

I don’t mean only the presidential election. I mean every or any contest you can vote in.

If you aren’t in the US, how would you vote?

I sincerely promise not to debate the answers.

I don’t like Ross Douthat (to put it mildly) but he published a very good article on the second defeat of Bernie Sanders. I can’t link but here’s a long quote:

The demand for police reform at the heart of the current protests doesn’t fit this caricature. But much of the action around it, the anti-racist reckoning unfolding in colleges, media organizations, corporations and public statuary, may seem more unifying than the Sanders revolution precisely because it isn’t as threatening to power.

The fact that corporations are “outdistancing” even politicians, as Crenshaw puts it, in paying fealty to anti-racism is perhaps the tell. It’s not that corporate America is suddenly deeply committed to racial equality; even for woke capital, the capitalism comes first. Rather, it’s that anti-racism as a cultural curriculum, a rhetoric of re-education, is relatively easy to fold into the mechanisms of managerialism, under the tutelage of the human resources department. The idea that you need to retrain your employees so that they can work together without microaggressing isn’t Marxism, cultural or otherwise; it’s just a novel form of Fordism, with white-fragility gurus in place of efficiency experts…

So the likely endgame of all this turbulence is the redistribution of elite jobs, the upward circulation of the more racially diverse younger generation, the abolition of perceived impediments to the management of elite diversity (adieu, SAT) and the inculcation of a new elite language whose academic style will delineate the professional class more decisively from the unenlightened proles below.

As I’ve been saying for many years: this is about job wars. If even Douthat noticed this, it’s time for everybody to wake up.

What bugs me is to see all the well-meaning people who keep saying,

“But, but, but! He was an abolitionist!”

“He died fighting against slavery!”

“He led the army of the North to victory over the slave-holding South!”

“He was a slave himself!”

“This statue was built with money collected by liberated slaves! Frederick Douglass was at the dedication!”

These people have bought into the narrative. They sincerely think this is all about racism and slavery.

It’s not. It’s about totalitarian control. The excuse for the implantation of totalitarianism doesn’t matter. It can be anything. And the persecution is supposed to be incomprehensible and unjustified. That’s the whole point. You are not supposed to be able to figure out an algorithm that will protect you. That confusion is the source of their power.

Imagine getting treated by a person with this kind of completely delusional thinking.

Raheem Kassam was banned on Twitter for linking a headline about the recent terrorist attack in the UK. 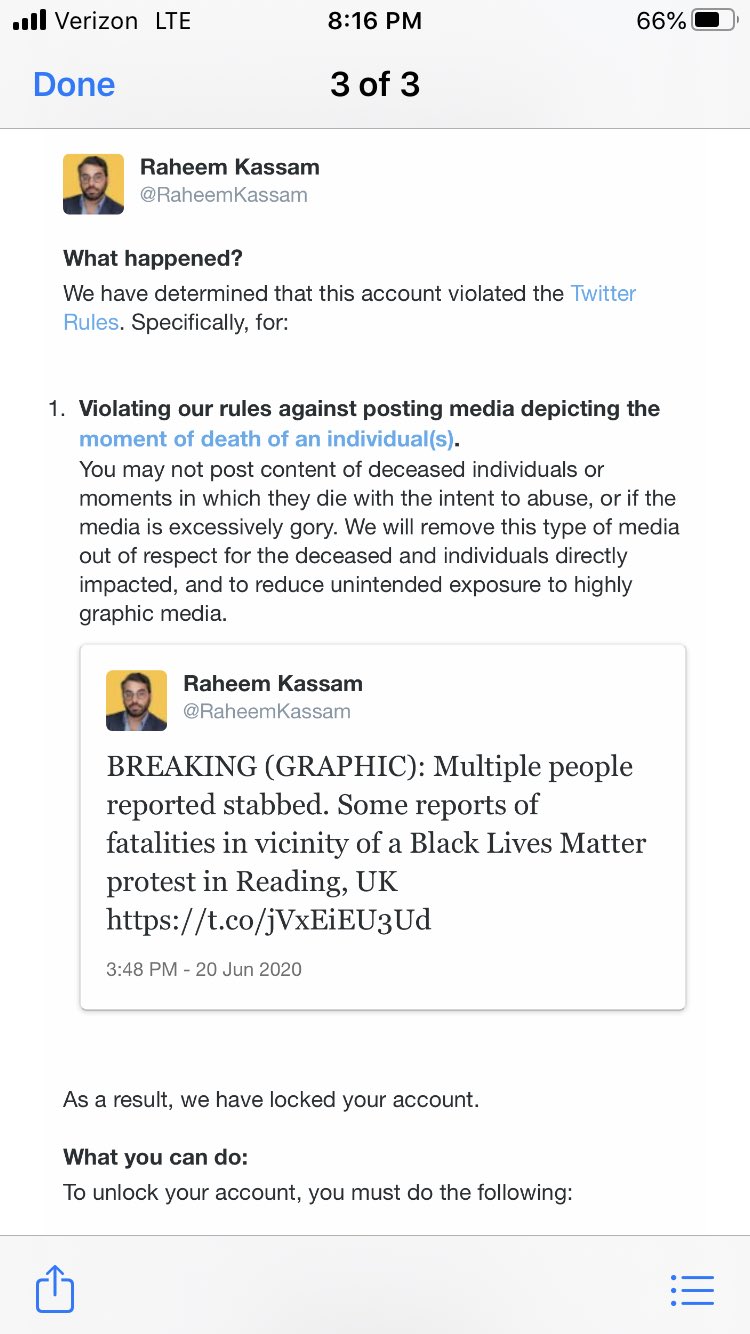 He’s one of many prominent dissident accounts banned in recent days.

Nobody will be allowed to speak.

Mike McCullough, a physics professor who writes online about physics, is being formally investigated by his university for liking some tweets. Somebody compiled a list and send it to the university. And the administration feels compelled to investigate.

Once again, Mike didn’t write anything controversial himself. He liked some tweets.

Let’s say the noose were real. They never are but let’s say this one was.

We had a 3-year-old shot and killed over the weekend in Chicago. One of the bloodiest weekends in history in an already extremely violent city. Where is an army of FBI agents? Where are celebrities tweeting in solidarity?

Black lives matter? This kid was a black life and he matters a lot less than an overgrown hysteric who freaks out over a garage cord. The garage noose story isn’t really funny in this context.

And also, where are all the armchair socialists and eager Marxists? The rich NASCAR driver gets tons of attention over an emotional outburst while a black toddler’s death gets zero attention because he’s not rich. And nobody’s noticing the class aspect of the situation.