Actually, I don’t know why I’m fretting so much about COVID-mongering. Working at an empty campus is great. It’s like I have this gigantic working space that is drowning in lush greenery and equipped with a Starbucks, cafeteria, library, convenience store, and a bookstore just for me.

Today, I went to the library. The librarian looked at my ID and lit up. “Oh! You!” she exclaimed. “Finally we meet!”

I was confused but then she said, “I’m Deb from interlibrary loans. I’m the person who processes your requests!”

Deb and I have had an intense ILL relationship for years but never met. We waved at each other excitedly through plexiglass shields and layers of masks.

I’ve been writing a narrative of my accomplishments in research for promotion. I’m only at the very start of writing it but I already feel so important that I probably weigh twice than usual, I’m so puffed up. None of it is new to me but seeing it all together is kind of impressive.

I’ve started rereading Dreiser’s The American Tragedy. I wonder how many times I’ve read it so far. Definitely more than 10.

I first read it when I was 7 or 8, I’m not sure. Then I reread it in Russian many times. And the first book I bought when I came to the US was a cheap paperback copy in English. I’m thinking it will last me a couple more readings, after which I’ll have to get a new one because it will fall apart completely.

If I had to explain America to students very far away – say, Ukraine – who only need the basics, I’d use this novel and Toni Morrison’s Beloved. And that would be enough.

Not that there aren’t other great American novels. Obviously, there are and I probably read all of them, except for some postmodernist crap I will be tortured with in hell. But they are not as complete. Take Grapes of Wrath, for instance. It’s a brilliant novel but it has nothing like the scope of Dreiser’s. This one has the factory workers, the farmers, the wealthy bourgeoisie, the Evangelicals, the lumpenized gig workers, the Midwest, the East Coast, the criminal justice system, and so on.

If anybody knows American novels I haven’t read that aren’t postmodernist or fantasy, I welcome suggestions. And yes, Beloved is obviously postmodernist. But she’s a genius so she pulled it through. Curiously, I don’t like anything else either Morrison or Dreiser wrote. I don’t hate their other stuff but I wouldn’t reread it unless somebody paid me to do it.

Woke mathematicians on Twitter are going apeshit because somebody said “2+2=4.”

“No!” they scream. “It’s all about context! You must be racist and transphobic!”

The debate has been raging on for two days.

And then everybody says the Humanities folks are crazy. 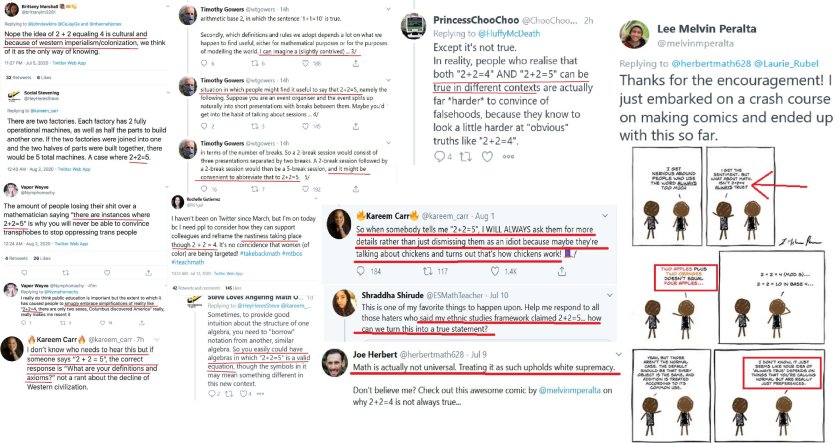 The image is a tiny snippet of the debate.

Wow, Australians really lost their nut with COVID. They have police knocking on doors to see if people left home and giving them fines for not being inside. And that’s one of the least insane things they are doing to combat an illness that afflicts… the elderly in care homes.

Did anybody know Australians were so neurotic? I always thought they were into the rugged bush living type of thing. But now it looks like they are worse nervous nellies than habitual MSNBC viewers.