Another mass shooting, this time in Southern California. It’s what, the sixth one in three weeks,?

P.S. OK, I googled it, and there have actually been 20 mass shootings since Atlanta.

It’s my birthday month, and if anybody is still looking, this is a hint.

At a store, I saw a whole rack of cute house dresses. Maybe there are people who use them as summer dresses but probably not in my age group.

The dresses had a small item in the same fabric attached to them. “Ah!” I thought. “Matching underwear! That’s cute.”

But then I came closer and realized that it’s not matching underwear at all. It’s matching face masks.

I was going to buy 3 or 4 of these dresses (I’m obsessed with cute house wear) but the masks put me right off the idea.

Look how useful the lockdowns have been to the Zoom class: 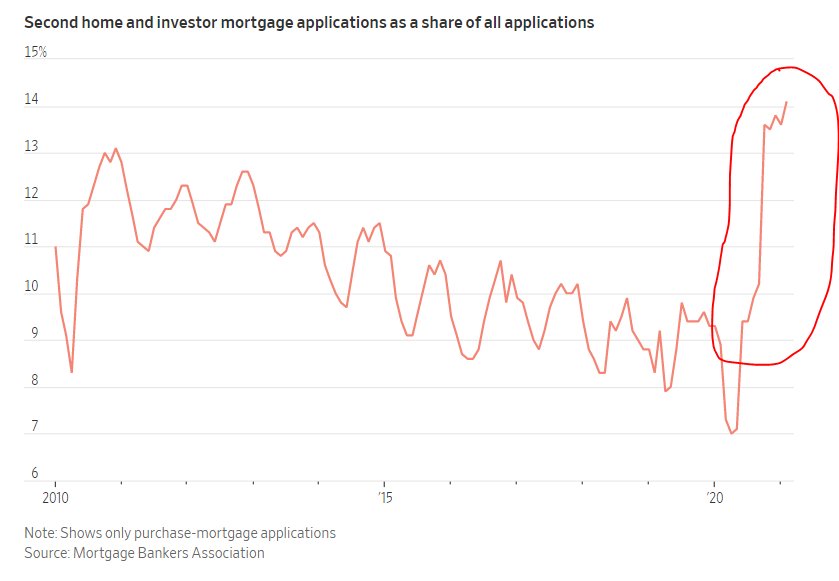 This “pandemic mitigation” is simply too useful as a means of wealth transfer to be abandoned easily. Also look at the previous moment when these figures were at an all-time high. That was when the austerity in response to the global recession hit. First home purchases drop as more people are pushed out of housing market, while investor purchases boom because a small minority makes out like bandits.

Yes, we are totally all in this together.

Twitter is unreadable today. Everybody is making clumsy April’s Fool jokes which invariably consist of people saying the opposite of what they believe. As a result, my feed sounds like a meeting of pouty COVID-obsessed SJW snowflakes. This makes me feel like I’m at work even when I specifically left campus to have a peaceful lunch break away from all that.

I hate this inane, childish tradition.

Here’s a detailed explanation of why “vaccine passports” are a horrifying idea.

It’s extremely difficult for most people to process the world through anything but analogies with past experience. New information doesn’t land. So when they hear “vaccine passports,” they imagine those sheets of paper moms get from pediatricians to show the school that their kids have been vaccinated. After that, it’s impossible to talk to them because they have found their “it’s just like” and won’t consider the possibility that it just isn’t.

Anything can be declared a public health menace. Anything. Participation in a protest, a social media post, a research article, a friendship with “dirty, ideologically diseased” people. You can’t possibly know who will have the power to do the declaring in the future. But once you allow yourself to be digitally tracked and have your behavior being used to grant you access to work, school, banking, socializing or going outside, there’s no going back to just being. Being unmodified and unmessed with. Being human.

I strongly urge everybody to read Zuboff’s book Surveillance Capitalism. In that book, Zuboff says that our only way out of this nightmare is to realize what is happening and say “no.”

I’m begging people to put aside their “but it’s just like childhood proof of vaccination” for 5 minutes and consider, what if it’s not? What if it’s possible for completely new things to come into existence because new technology appears?