>I just fnished reading http://rcm.amazon.com/e/cm?lt1=_blank&bc1=000000&IS2=1&bg1=00FF0F&fc1=000000&lc1=0000FF&t=clasblo-20&o=1&p=8&l=as1&m=amazon&f=ifr&md=10FE9736YVPPT7A0FBG2&asins=0143115626. What an absolutely delightful book, my friends! I enjoyed every one of its 480 pages profoundly. Tana French is a young Irish writer. The Likeness is one of those really good books that its female author tries to masquerade as a mystery novel. The mystery itself is not bad, especially if you manage to get over a few of the initial premises that border on the fantastic.

Cassie Maddox, a young Irish policewoman, goes undercover among a group of PhD students who live in an old house they are attempting to restore. This premise is, of course, highly unrealistic. Graduate students in literature have a certain way of talking and acting that cannot be faked. In reality, un undercover police officer would have blown her cover during the very first discussion on why Lacan is wrong about everything and Eagleton’s new-found essentialism is annoying. Nobody can fake writing a doctoral dissertation convincingly. You have either lived through that process or not.

Having said that, however, I have to confess that French’s writing is so good that soon enough you forget about these inconsistencies and even forget to care about the identity of the killer. The Likeness is a beautifully written story about today’s Ireland. It offers incisive criticism of modern consumer society without falling into the trap of bemoaning the good old days:

Our entire society’s based on discontent: people wanting more and more and more, being constantly dissatisfied with their homes, their bodies, their decor, their clothes, everything. Taking it for granted that that’s the whole point of life, never to be satisfied. If you’re perfectly happy with what you’ve got—specially if what you’ve got isn’t even all that spectacular—then you’re dangerous. You’re breaking all the rules, you’re undermining the sacred economy, you’re challenging every assumption that society’s built on.

What makes this novel so enjoyable is that, in places, it reaches the level of insightfulness that is normally completely our of reach for the mystery genre writers. In The Likeness, the main conflict arises – and eventually leads to murder – because of a profound dissatisfaction that the characters of the novel feel with the very structure of society:

Part of the debtor mentality is a constant, frantically suppressed undercurrent of terror. We have one of the highest debt-to-income ratios in the world, and apparently most of us are two paychecks from the street. Those in power—governments, employers—exploit this, to great effect. Frightened people are obedient—not just physically, but intellectually and emotionally. If your employer tells you to work overtime, and you know that refusing could jeopardize everything you have, then not only do you work the overtime, but you convince yourself that you’re doing it voluntarily, out of loyalty to the company; because the alternative is to acknowledge that you are living in terror. Before you know it, you’ve persuaded yourself that you have a profound emotional attachment to some vast multinational corporation: you’ve indentured not just your working hours, but your entire thought process. The only people who are capable of either unfettered action or unfettered thought are those who—either because they’re heroically brave, or because they’re insane, or because they know themselves to be safe—are free from fear.

Just this one paragraph makes the novel absolutely worth reading for me.

The Likeness is only Tana French’s second novel and an obvious improvement on her first one, In the Woods

. I can’t wait to see how far this growing author will go. Her talent is undeniable and her command of the language is unique. Maybe one day she will feel strong enough to stop hiding behind the protective screen of the mystery genre and will write actual literature. I have no doubt that French has enough talent to achieve that. 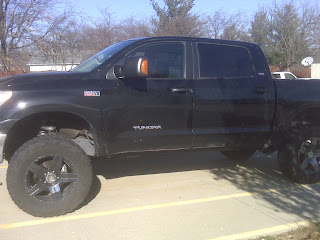 I will never understand what strange psychological problems lead people to drive this kind of total monstrosity in the Midwest of all places. Besides being an environmental nightmare, it is incredibly ugly and inconvenient. Getting into it and finding a place to park it must be quite a production.

I keep wondering whether the proud owner of this coffin-like structure even knows what tundra is and whether he is hoping to find it in Southern Illinois. It is pretty cold here right now but we are still too far away from turning into a tundra.

Sent via BlackBerry by AT&T