We were talking a walk and met over a dozen honking cars. What’s happening? Has a war started? Or have the Cardinals won something at the sport they play which I’m guessing is baseball?

Or is something else going on?

I never got a grade lower than a B- on any assignment in any course ever in my entire life. So this is a very new experience.

And this is a new theme song I’m suggesting that N. should adopt:

Please remember this: the best thing you can do as a contingent faculty member is join a union. Our part-timers are unionized, and none of the horror stories we hear about the mistreatment of instructors and lecturers can happen to them. The moment an administrator tries to treat them as disposable, the union steps in, and the administrator has to choke on these wrong-headed decisions.

If there is no union on campus, contact any existing union that has organizers nearby and ask them to send organizers.

Brainbench is a place that certifies people in all kinds of programming languages / software management, etc. Here is the most recent list of the people who got the highest individual scores in the most recent competition:

Of course, the winner’s last name makes it obvious he is not from the UK. I really dig seeing all these last names that sound very much like mine in a context that has nothing to do with prostitution or gang activities.

And here are the lists of countries that have the greatest number of programming nerds: 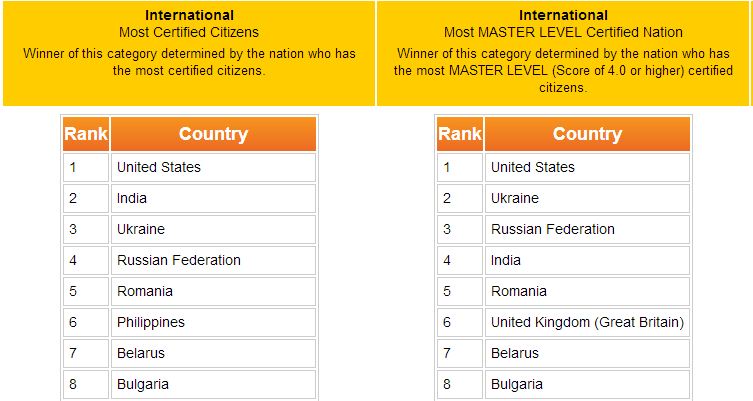 Look at the right-hand column. Ukraine did better than India! Can you imagine how hard it is to beat India at programming?

I just talked to a colleague who used to be a high school teacher and is now teaching college for the first time. I asked her what was the most unexpected thing about college teaching that she encountered.

“I didn’t expect college students to be exactly the same as high school kids,” she said. “There are students who don’t even try to make an effort, who abandon the course for no particular reason after it’s too late to withdraw officially, who come in late, who listen to music in the classroom, who resist learning with everything they’ve got.”

“Yes, but that is what’s so shocking. These students have to pay to be in college. Don’t they see that they are wasting this money – money they often don’t even have – by refusing to be educated?”

I also find this behavior to be completely bizarre. We don’t have any rich students who know their parents will easily cover the costs and not even notice it. I’ve seen many students with their parents at a variety of events our school organizes. These are all very modest families who are making an effort to send their kids to college. It’s one thing when a student comes from a crappy high school, falls behind, and has to drop out. What I don’t get, though, is what makes students who are doing quite well just give up for no discernible reason.

You’ll say this is high-school mentality that these students haven’t been able to shed just yet, that they are young and immature. You know what I’m noticing, though? You encounter this defeatist mentality and this profound indifference among the age group of 25-45 more often than in any other age group. (We have quite a few older students.) The best, most responsible, most engaged, passionate, energetic, and intelligent students are those between the ages of 45 and 75 (I haven’t had anybody older.) The youngsters in the age group of 18-25 fall somewhere in the middle between the 45-75 and 25-45 group.

Of course, this is anecdotal evidence based on my quite limited experience.